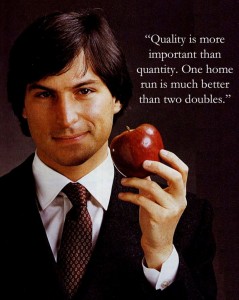 Steve Jobs transformed the digital world we live in. He was brilliant, innovative and many other things, some of which not so flattering. But despite his flaws, or maybe because of them, he changed the way we use computers and phones; the way we interact with the world; the way we manage our digital content and so many other aspects of our lives.

Steve Jobs wanted to create a company that would thrive and succeed for many years after he was gone. In a way, Apple was one of his children. In some cases, even, he looked after it with more love and passion than he had for his real children. Did he succeed? Is Apple going to continue to be so amazing even now that Steve is no longer at the wheel?

Of course, Apple’s creations are not actually Steve’s creations. The company is a well-oiled machine where brilliant engineers and designers work cohesively to create great things. But what Steve brought to the table served to turn those great things in amazing masterpieces. His perfectionism and attention to detail, bordering on pathology, are what took care of every little thing from the shape of the icons on the screen to the shade of the metal for the casing. If the smallest thing about the product wasn’t right, Steve would throw it away and tell people to start again from scratch. This quality of his is the reason Apple releases perfect, finished devices that are a treat to the eye and the mind.

On top of that, Steve’s ability to “twist reality” is the reason for the many innovations we have seen over the last three decades. “We can’t do that, it’s impossible”, the engineers would say, “Of course you can, it’s possible”, would be Steve’s response… and they would do it… every time. Now that there’s no one to push and push like he did, Apple’s products might start lacking in innovation.

One of his questionable qualities is to ignore people’s feelings and say exactly what is on his mind without any regard for the reaction. Yes, he was very insensitive in that department (to avoid using another word), but that side of his character also contributed to Apple. When managers all over the world try to be fair and not hurt anyone, flawed products are created. Walter Isaacson says that Tim Cook is the exact opposite of Steve – cool, calm, collected. Can someone like that push people to their creative limits?

Steve Jobs made a show at every product presentation. In 2010, when he announced the release of the iPad, some magazines compared the excitement to the one of the Ten Commandments tablets. These shows play a major role in the fact that people buy Apple products. They buy them because Steve told them they need them. He instilled an almost cult-like devotion in Apple followers which helped turn Apple into a much loved company. We didn’t even know we needed an iPhone, iTunes, iMac, iPad, iPod, iCloud and all the other great things until he showed us that we can’t live without them. Who is going to show us now…?

Since Steve’s death, Apple has released some good and some questionable products. The Retina Display, for example, is an amazing feat of technology and deserves high praise. iOS 6’s Maps, however, are a huge black mark in the company record – would Steve not have persisted in doing them better and better until they were perfect? Would he have allowed them to be released in their condition? And how about the iPod 5? Steve’s core belief was that all the products should be as simple and clean as possible to ensure the ultimate user experience. Would he have allowed his engineers to add a camera and Siri to a product that’s meant for music and videos? Very doubtful…

The best we can hope for is that the guys at Cupertino will remember Steve’s advice and be able to carry on his legacy. The few mistakes made in the last year may be attributed to the fact that the company was quite shaken from losing its founder but it will get back on its feet. We just have to give them time and who knows – they might be able to keep up their streak of success and innovation.

Oh yes, and one more thing…. Remember to think differently!

Rita Rova is a gadget lover and writes about her passion for Oz Coupons – the coupon code website that endeavors to bring you the greatest discounts for the latest technology releases, enabling you to stay ahead of the technology curve for less.