If you haven’t been reading Key of Z by Evil Ink Comics, you’ve been missing out on a great story of survival, gang warfare, loss, healing and, oh yeah, zombies.  Issue #4 follows Nick Ewing as he executes his plan to bring down the ruling gangs of New York.  Without giving too much away, you’ll get to see Ewing get some unexpected help in breaking out of his cell before getting to see his plan come to fruition, followed by some nasty harmonica jamming and some zombie rage.

Key of Z #4 closed out the 4 issue arc nicely while leaving room for more stories to be told. This issue saw the most zombie action in the series so far and also got a little deeper into Ewing’s past and his healing process. Overall, the series has featured some great artwork and writing and is a must-read. 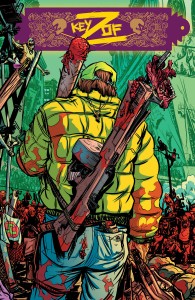 Evil Ink Comics is an independent publisher and house of creation owned by Coheed and Cambria‘s, Claudio Sanchez.  Their roster of graphic and prose novels includes the hugely popular Sci-fi series, The Amory Wars: Second Stage Turbine Blade, In Keeping Secrets of Silent Earth:3 and Year of the Black Rainbow; the musical dark comedy Kill Audio; and forthcoming zombie-inspired Key of Z. With Sanchez at the creator helm of all of Evil Ink’s series, writing duties are currently shared with Peter David (Incredible Hulk, Fallen Angel) and Chondra Echert (Kill Audio, Key of Z.)  Evil Ink has worked with dozens of great artists, including The Walking Dead‘s Tony Moore, Chris Burnham (Batman Incorporated, Officer Downe) Aaron Kuder (The Amory Wars, Key of Z) and Sheldon Vella (Kill Audio, Deadpool #32.)  In addition to books, Evil Ink is behind the Kill Audio vinyl figure, winner of the 2011 Designer Toy Award for “Best Toy From a Comic.” Projects in the works include an Amory Wars game application, novelization of The Second Stage Turbine Blade miniseries and a follow-up series to Kill Audio.