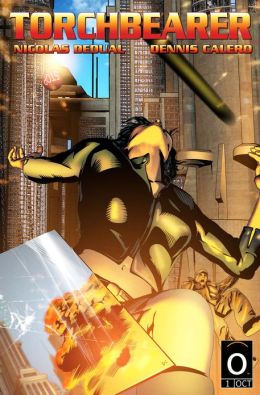 Torchbearer, an independent comic written by Nicolas Dedual and illustrated by Dennis Calero, is described as “corporate espionage meets science fiction” and it certainly meets the description. Though there is not much background provided, the official synopsis tells us that Prometheus, a major corporation, has been amassing power and resources, biding their time to take over. In issue #1, the reader witnesses a break-in at Prometheus, followed by the destruction of four of their laboratories. Selene Elis, an employee of Prometheus is called in to investigate, but as the issue progresses it’s revealed that she is a mole, providing access to whomever is behind the attacks.

Overall, Torchbearer is well written and features solid artwork. Issue #1 lays the groundwork for a story of corporate warfare and futuristic technologies (flying taxis and teleportation!). If you want to check Torchbearer out, you can check out the Odd Truth, Inc. website or head over to Comixology where you can buy the first two issues for $1.99 each.