Last week, Cartoon Network premiered the first two episodes of an all new Thundercats cartoon.  Being that I’m a huge Thundercats fan, I set up season passes on both Tivos just to be safe.  As luck would have it, a thunderstorm came through and knocked out my power so that I only got to see the first and last ten minutes of the show.  After some digging, I was able to find it online and give it a watch.  I was worried that as a huge fan of the original, I was going to hate this new version.  To my surprise, I thought this new version was great.  See why below, but  beware of spoilers. 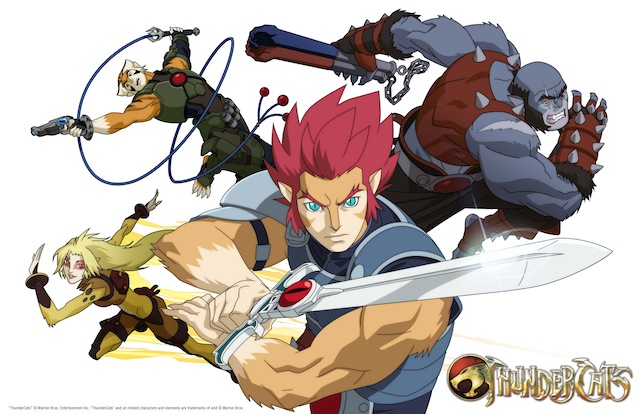 The new rendition of Thundercats takes place on the Thundercats home planet (I’m not sure if this is Thundera or Third Earth).  Lion-O is in training to become Lord of the Thundercats, but is vastly inferior to his adopted brother Tygra, who due to lack of bloodline can never become Lord.  The Thundercats live in a simple world, without any fabled technology, and are constantly at war with the mutants.  Lion-O, the precocious cat that he is, is constantly on the hunt for the technology told of in folklore, but is looked down upon for this by Tygra.  One day, after training with Sword of Omens, news of an arrival comes to the palace.   General Grune has returned following a trip to find the Book of Omens.  As any Thundercats fan would suspect, General Grune double-crossed the Thundercats and snuck mutants armed with technology and Mumm-Ra (in mummy form) into the walled city.  A battle ensued and the Thundercats could not compete with the great technology wielded by the mutants. Claudis, Lord of the Thundercats was killed, but not before he could tell Lion-O he was proud of him. The episode ends with Jaga sending Lion-O, Tygra and Cheetara off to find the Book of Omens which could provide them with the technology needed to exact revenge on Mumm-Ra, Grune and the mutants.

All in all, the first two episodes (presented in a 1 hour special) were very enjoyable. The new storyline is much deeper than the original yet still has much of the same mythology of the original. Hopefully future episodes keep up the excitement and quality 0f story-telling achieved in the premiere.