Another big score for NYCC!

Best known for: The Walking Dead and Skybound

Robert Kirkman will be discussing the 100th issue of INVINCIBLE this January; introducing CLONE written by David Schuler and pencilled and inked by Juan Jose Ryp and colored by Felix Serrano; and highlighting THE ROAD TO WOODBURY written by Kirkman and Jay Bonansinga for St. Martin’s Press.

Robert Kirkman’s success and passionate advocacy for creator-owned comics led him to become the first person invited to become a partner at Image Comics since the company’s inception twenty years ago and he formed his own imprint there, Skybound, in 2010. Kirkman is the creator/writer of the Eisner Award-winning The Walking Dead, long-running Invincible, all-ages Super Dinosaur, The Astounding Wolf-Man, and new title Thief of Thieves, among many others. Kirkman has earned the respect of the comic, writing and television communities and topped the New York Times bestseller list for graphic novels in 2011 and in April 2012, he took the top five spots on both the hardcover and paperback lists. He’s the creator/executive producer and writer of the hit television show, AMC’s The Walking Dead, the highest-rated basic cable drama of all time in the U.S, also an international success in 120 countries and 250 million households. AMC is developing Thief of Thieves as a potential series with Kirkman serving as creator/executive producer and writer. www.Skybound.com is your destination for all news and merchandise for Robert Kirkman, The Walking Dead and all Skybound titles. 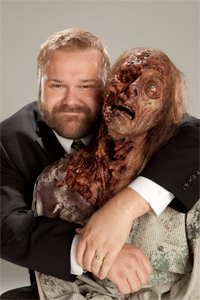