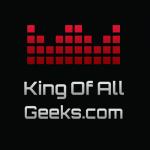 Batman’s episode of Bad Days is a nice return to the humor of the first few episodes. Check it out below.