I know it’s been announced for a while but I felt that I have been posting too much comic book news. A lot of people have been making a big deal about the new Ultimate Spider-Man being half black and half hispanic. Many feel it’s a ploy by Marvel to gain more readers. I think it happens to be just the opposite. Our society, especially that in NY where Spider-Man lives, is a diverse place. It’s only natural that our superheroes reflect that.

That being said, I think the new costume looks pretty cool. I’ll be interested to see what powers he actually has and if his character will mesh with the mainstream idea of what Spider-Man should be. 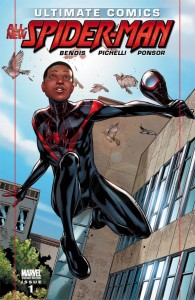